Interpretive Summary: Researchers get a closer look at the inner workings of duck enteritis virus

Every year, waterfowl producers around the world suffer economic losses due to duck enteritis virus (DEV), also called “duck plague.” This virus is a member of the alphaherpesvirinae subfamily, and it causes severe illness and high mortality in ducks, geese, swans and other birds.

DEV appears to rely on a protein called pUL13 to infect host cells, but little is known about how this protein works.

In a new study, published recently in Poultry ScienceⓇ, scientists at Sichuan Agricultural University report the discovery of two key signaling molecules that allow pUL13 to gather in the host cell nucleus.

The new study builds on previous research from the Sichuan Agricultural University team. Their 2017 study showed that pUL13 gathers in the cytoplasm and nucleus of the host cell. This finding was interesting because it is actually very difficult for a foreign protein to enter a host’s cell nucleus.

For the new study, the researchers worked to track down the NLS that allowed pUL13 to move to, or “localize,” to the cell nucleus.

By studying DEV’s genetic sequence, the researchers predicted that the virus could make two amino acid sequences, called peptides, that might work as NLS.

To test this prediction, the researchers used strains of DEV that had one or both NLS deleted. They found that deleting both signals led to pUL13 lingering in the cytoplasm and not moving into the cell nucleus. “These results suggest that both NLS1 and NLS2 are responsible for and work together to enhance the nuclear localization of DEV pUL13,” write the study authors.

To learn more about how these NLS helped pUL13 move into the cell nucleus, the researchers treated infected cells with the pharmaceutical ivermectin. Ivermectin has been shown to inhibit the ability of viral proteins to move into a cell nucleus—but only if that movement relies on an interaction between molecules called importin alpha and beta.

The researchers found that ivermectin treatment did result in lower levels of pUL13 in the cell nucleus. This result suggests that pUL13 relies on the “classical” mode of transport, via importin alpha and beta, to get to the cell nucleus. The NLS they discovered likely mediate this interaction.

Although it is too early to know whether these insights could lead to better vaccines or therapies for DEV, the study is an example of how challenges in poultry science can lead to breakthroughs in basic research.

From a virology standpoint, pUL13 is especially interesting to study because it is related to proteins in human pathogens. Human cytomegalovirus, Epstein-Barr virus, and human herpesvirus 6 each have “homologous” proteins to DEV pUL13. These proteins don’t perform the same functions for each virus, but they have a common ancestor—and they gather in the same location: the cell nucleus.

Now that the researchers have uncovered the NLS driving pUL13 localization, the next step is to further study the function of this protein.

What does this study mean for producers? 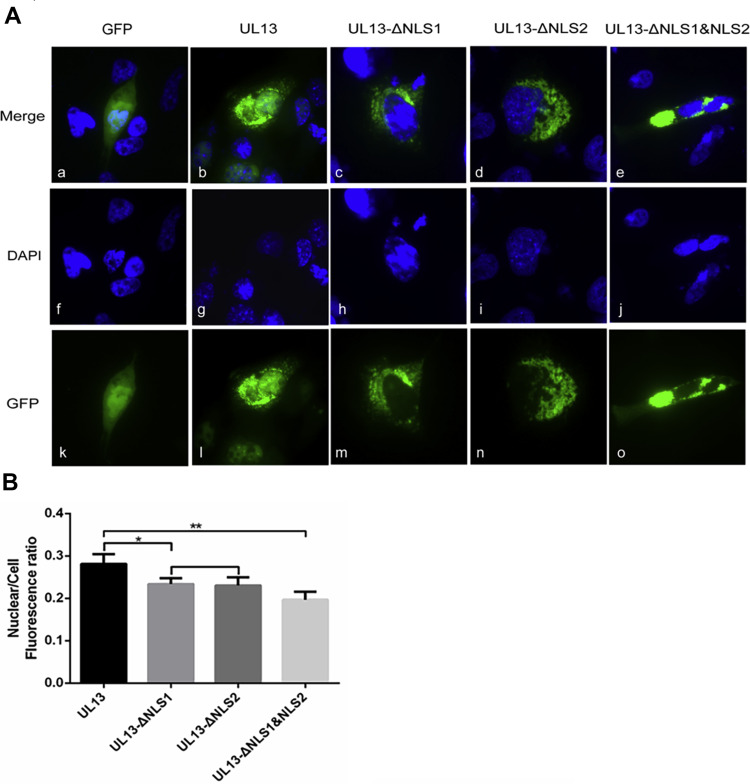